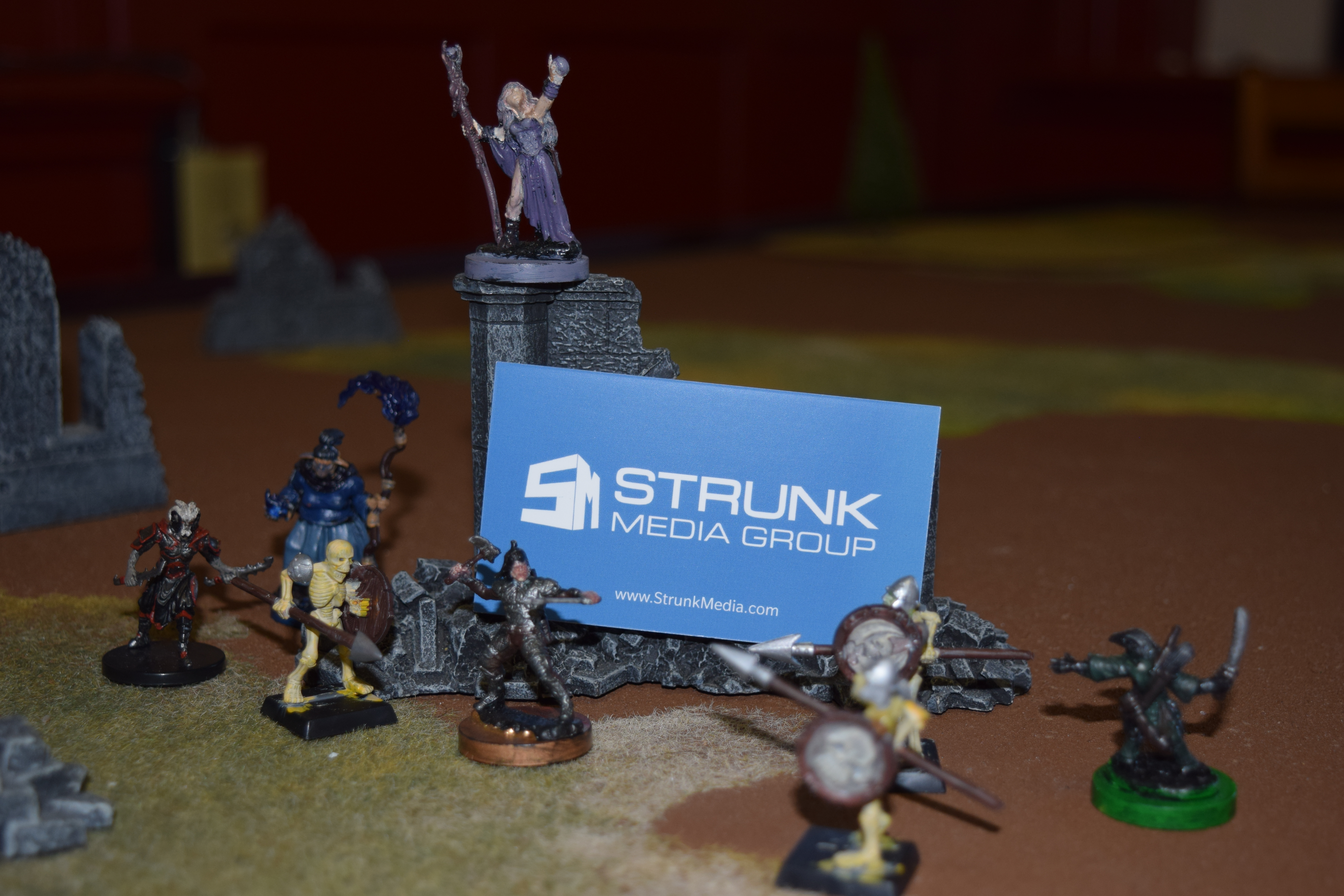 Other offices go on team building retreats, try out trust falls, or play ice-breaker style games. Each of these has their place in creating a cohesive workplace environment, but at Strunk Media, we do things a little differently. Normal team building exercises don’t quite fit our methods because we’re not a normal team.

Instead of discussing workplace responsibilities and getting up to move around and establish a rapport, we sat down to deal with some dungeons and fight some monsters. Using the 5th Edition of the tabletop classic Dungeons & Dragons, we divided the office into two groups, and worked through communication, collaboration, and consequences as teams.

For the most part, our team was aware of Dungeons and Dragons [D&D], but most people hadn’t played much if any of the tabletop game for many years. For those not in the know, D&D is a tabletop role playing game. Players assume the role of a character in a fictional world of magic, treasures, and monsters.

Once the game begins, players act out how their characters might behave given the current situation. When they attempt to do something like attack a monster, pick a lock, or dodge a trap, players roll dice. This gives a sense of randomness that can result in some great and terrible situations.

Every group of players plays in a way that best suits their collective style, so no two games are the same. The basics don’t change though. Each game has a group of players (known as a party) and the scenario is put forth by the Dungeon Master who acts as a kind of referee.

Setting up the game required a bit of prep on my part as the groups’ dungeon master. With a few years of experience under my belt running games, I had a decent idea of how to get the players into roles that fit them best. I had the players fill out quick surveys in order to gauge their experience with the game and what kind of characters they wanted to play.

Because of the number of team members we had, we opted to split the office into two teams in order to give everyone the time to play and express themselves.

Players received copies of their character information, a miniature to represent their character, and a set of dice. Both groups were given similar tasks to complete, but modified to focus on the particular skills of each party.

Both groups were given two characters that were played by me. These non-player characters [NPCs] were meant as a demonstration of how the party measured up against non-heroic characters. They were of humble origins with no known powers to speak of. It was interesting to see how the groups interacted with characters who were not represented by actual people at the table.

Both groups played the part of a group of hopeful adventurers seeking entrance to an adventuring guild. In order to prove themselves, they were tasked with finding an individual who was creating problems for the guild, destroy their notes and research, and bring them in for punishment or dispose of them if capture was not possible.

Team 1 began its session with a fight against a group of skeletons. The group had the opportunity to test some of their skills and learn a bit about the rest of the group. While one player learned that the skeletons were especially weak to crushing attacks, this information wasn’t shared with the other members of the party, making the fight less efficient.

The group then moved into a ruined keep in search of the dark wizard. While inside, the team split up. Some inspected a strange altar, others went to look into a side room, and others inspected a fountain of bubbling dark liquid. In an abundance of caution, one of the players had one of the non-player characters taste test the liquid, which proved to be fatal.

Some conflict arose when the group found a number of healing potions. The issue concerned who would hold them, but after a brief discussion about the merits of both sides, a solution was figured out that worked for everyone.

After delving into the dungeon below the keep, the party dodged some traps and came upon the dark wizard in a large cave. By communicating and coordinating strikes, the party was able to quickly dispatch the wizard and his large construct. Unfortunately, the other non-player character fell in battle.

Once they found their target, they saw that he’d created an enormous creature made up of bones and rock. Team 1 collaborated and opted for a surprise attack to catch the wizard off guard. Triple D (Kitchen) charged in with his hammer. Hei-Hei (Danny) threw an exploding ice knife into the spellcaster. Bessie (Cara) launched a barrage of explosive energy. Furball (Livy) and The Forbidden One (Strunk) both fired arrows at the massive grave golem.

In an effort to overwhelm the caster, the party ended up focusing on him first. By maneuvering themselves to surround him, they were able to bring him down despite his healing magic. Once he was taken care of, the party turned its attention to the massive creature. The Forbidden One leapt onto its back consistently striking it. In the flurry of blows, Furball managed to get a critical strike in a soft spot to land the final hit.

Throughout the fight, each member of the team communicated to each other what they saw and the best way to focus their efforts. In contrast to the earlier battle, this one was quick and well coordinated.

Team 2 found their ruins populated with scarecrows. When disturbed, the scarecrows began attacking the party. They quickly learned the enemies were weak to fire and shared that information quickly to benefit the rest of the party. Once everyone began to use fire in their attacks, the fight went by quickly.

Inside of the ruined library structure, they found various trapped objects and locked doors. Some of the party found themselves locked in a room filling with poison gas, others were sprayed with acid when they did not check a treasure chest before opening, and one door had a spike trap situated above it. Each of these traps were triggered by the party not behaving cautiously.

One of the non-player characters was in a tight spot when their mouth was glued shut by a trap cookie, and nearly eliminated by a cup of acid tea. Luckily a member of the party acted quickly to restore her to health. After all of that excitement, the party decided to hold off on their quest and take a long rest (8 hours) before continuing.

The party then moved into the lower reaches of the ruined library. There they triggered even more traps such as animated armor and a hallway that began to narrow, nearly crushing the people inside of it.

After recovering from those setbacks and discovering the location of the tinkerer, the party rushed in to try to apprehend their quarry. In the fight, the target was nearly destroyed more than once, but they used restraint and merely knocked him out to return him for punishment.

Because the team had taken their time searching the ruins, the tinkerer had already finished his latest creation, a massive stone golem.Team 2 tried to sneak into the room with their target, but one of the NPCs made too much noise, resulting in the entire plan having to adapt in a heartbeat. Cornwad (Conway) ran around to one side of the battlefield drawing the construct’s attention away from the rest of the party.

The rest of the group began slinging spells and arrows, running to the other side of the room. Fubboing (Clay) ran right up to the tinkerer and began wailing on him with his martial arts training. With some serious hits from Sutorate (Devin) and Sprinkle’s (Elissa) spells, their target nearly went down.

The fight nearly went south for the group when the golem turned its attention to Fubboing, crushing him and nearly cutting his adventure short. At the same time, Buddy (Finke) noticed that the tinkerer had drunk healing potions and had more on his belt and tried shooting them off with an arrow. The strike was not quite successful, but still managed to disrupt the enemy’s attempt to heal himself. The next few actions proved crucial for the group.

Between Cornwad and Helga (Aubree), the golem was struck down with divine magic and broadsword. Soturate used a healing scroll to bring Fubboing back from the brink. The target began to run away, but Fubboing managed to land a hit as he turned to run. In his weakened state, the fleeing artificer was brought down with a sleeping spell from Soturate. Incapacitated, the party was able to bring him back for his just punishment.

We sat down to discuss as a team where each group excelled and potentially fell short in their own dynamics. That the huge array of options available to the players created a steep initial learning curve. As everyone became more comfortable in their characters and the way the game played out, they felt more at ease working together as a team.

When talking about coming together, Matt Strunk, CEO, said that, “We were figuring each other out—getting a feel for each other, the game, what we had to do.” Once the parties got through the initial mechanics trial and everyone understood their own abilities there was another hurdle.

“In the beginning, I don’t think we thought of ourselves as a collective team,” said Cara Hayes, Account Manager. “Everyone wanted to show off their powers and not come together. We wanted to be our own heroes. By the end, we definitely overcame that and worked as a team.”

Both groups did manage to become more efficient teams by the end of their sessions. Team 1 had more significant struggles when it came to building that sense of teamwork earlier on, but they were decisive in their actions. Team 2 came into conflict within the party less often, but took their time and were slower to act on their mission. They were able to apprehend their target, whereas Team 1 opted to go the more aggressive route.

When it came to the parties’ NPCs, one group definitely came out on top, but each group could have engaged them a bit better. Team 1’s NPCs were eliminated because of the decisions of the party. Team 2 nearly lost their tag-alongs, but managed to keep them up and fighting through the end of the adventure.

Overall, if both teams were to evaluated against each other, I would say they fared about even. They started as a scattered collection of beginner heroes, but eventually coalesced into a real team by the end of our sessions. The real test would be to play again with the groups mixed up again, and maybe a few new characters, and see how the teams fared.

This unique brand of collaboration and teamwork is just one of the things that sets our marketing family apart from other agencies. We’re always learning, trying new things, and adapting to the constantly changing environment. When it comes to taking on these fresh challenges, Strunk Media is ready to face them head on with our brilliant team.

William Houlette is an educator and editor turned content writer for Stunk Media Group. When he's not crafting excellent copy in the office, he's writing and running tabletop games for his friends. He also loves reading, playing video games, and playing with his cats.